Varenna on Lake Como, is a town I adore, so when my daughter and I began planning a trip to Europe, I booked us into a small apartment there. I had often spoken of my love for the place, and one area in particular. It was day three of our five day stay. We’d taken the ferry to many places, including Bellagio, Cernobbio, Lenno and Tremezzo. We had shopped, eaten, and walked part of the old Roman road. Lake Como is fabulous and I was happy, except we hadn’t yet visited the castle.

It is a fairly steep path to the remains of Vezio Castle and I remembered how puffed I’d been last time I climbed. Anyway … this time the climb didn’t seem so steep, and I wondered if it was my anticipation growing wings. I crossed my fingers like a child, hoping like mad he’d still be there.

We paid our entry fee and set off along a shingled path. I stopped. Lara, slightly behind me. “He’s here,” I said, and grabbed her arm.

“Where?” I pointed to the right.

“Oh my God!” she said. Artù was sitting on his perch, in the shadows of his large cage, 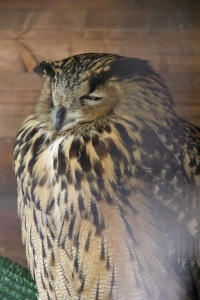 just as he’d been on my last visit. His eyes were closed.

Artù is a huge raptor, a giant Eurasian Eagle Owl, almost a metre tall. He is just fabulous – his demeanour placid, sleepy.

“I love him,” Lara said. “He’s amazing. I’ve never seen a creature like it.” And we just stared and stared at him.

It was possible to photograph him without using the flash, and I encouraged Lara (who is a terrific photographer) to take plenty. We didn’t want to leave him. To say we cried may sound rather over the top but that is how moved we were by this creature. Artù blinked his white-lidded eyes and we were in love – simple as that. We still are.

Thanks to my daughter, I can see him every day, because he’s uploaded onto my computer as my screen saver.

An excerpt from a short fictional story I wrote following my first visit to Varenna.

…Clara set off for a walk after breakfast. She would climb the hill to Castello di Vezio, explore the gardens and look out over the lake. Enjoy the day. Accentuate the positive. And she would try: she really, really, would try to erase the negative. The steps up the slope were unforgiving. She stopped often, her hands on her knees, wheezing. I wonder how my life would be if I’d been called Heidi? Clara thought. If she’d been named after the wholesome Swiss girl, she might not have grown up so dependent – so lacking. A huff on the inhaler and she climbed until she could see the walls of the mediaeval ruin. There were four or five people ahead of her taking the higher route, so she took the lower, emptier one. The path was unsealed and rather dusty but it didn’t bother her; the inhaler had done its work.

The views. She could see through the drifting cirrus to the fork of the lake and named the towns she had touched fleetingly the day before. In the trees’ shadow was a large aviary, which appeared abandoned, but sensing a movement she turned her head. She gasped. In the far corner, the largest owl she had ever seen sat batting its feathery white eyelids. Clara crept forward. Keeping her arms low she stretched them out, as a rough measure of the its size, should anyone at the clinic ask her. It was the first Eurasian Eagle owl she had seen, and although she knew they grew to eighty centimetres or more, she still couldn’t believe she was looking at a live one. Its feathers were a lovely mix of brown, white and black. She had never seen a creature she wanted more, to enclose in her arms, to feel its soft feathers and tiny beating heart…