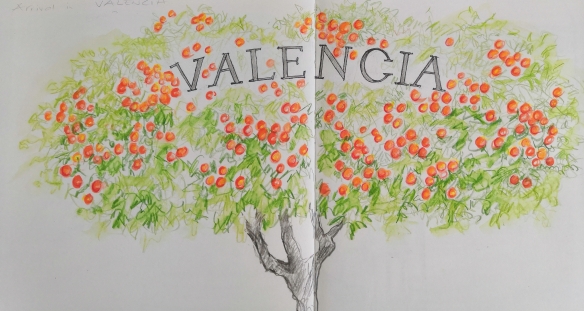 It was a peaceful 3hr train ride from Barcelona to Valencia, which gave me time to sketch the orange tree (above), abundant with Valencia oranges – naturally. I looked about the carriage, and saw most of the group head-down sketching, or colouring their work, assiduously. It has become clear that Tony’s enthusiasm for sketching has caught on.

In the city we found the streets packed with locals in traditional costume out in force to celebrate the so-called ‘Handerchief’ Saint’s Day. After a quick dumping of bags in the rather marvellous Hotel SH Inglés, in Plaza Redondo (where Ernest Hemingway often stayed), we joined the melée to view the women, men, and children parading and posing in their finery. We followed guide Amelia to our first Valencian lunch, which was tapas-filled and fabulous as any we’d eaten. And when we thought the eating was over, at least until dinner, another taste surprise; sampling a special local drink made from nuts, with churros and sweet pastries to dunk!

Then it was off walking again, to the old (13c) gates of the city –

Torres de Serranos – our first sketching destination. Except, when I faced the large stone edifice, as wonderful as it was, I felt the familiar ‘I don’t feel like drawing you’ feeling overcome me, and sketched a street corner behind it, as the scene appealed more.

I quite liked this sketch, especially as I’d stuck to using pen (0.3) and watercolour. I love the way Spanish houses, although abutting each other, are clearly delineated using bold, yet fitting colour. I love them.

of Arts and Science complex). Boy oh boy! This was the most amazing set of buildings. Curves overlapping more curves; arcs, arches and connecting bridges, mirrored in vast pools of still water. This time, I knew I could not avoid what faced me, for wherever I turned, more buildings of the same scope confronted me. I secured a nice spot in the sun, took out my sketchbook, took hold of my pen and started. I did a couple of ‘thumbnail’ sketches first, looking and looking, measuring with my eyes before tackling a larger view. It was rather like how I set about doing a portrait.  And do you know what? I liked doing it! 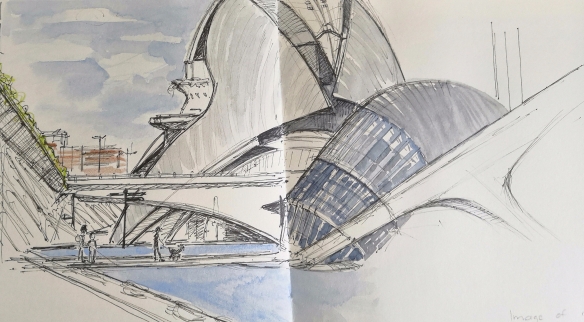 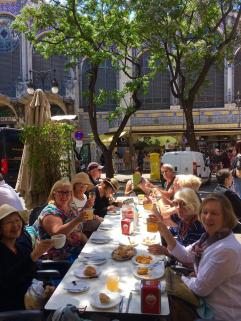 Valencia has so much to offer, including very pretty places to have lunch. We walked back to the hotel, allowing just enough time to put colour to some of our sketches, before it was time to go to Ateneo Mercantil, a special rooftop bar with fabulous city views, so we could experience a Valencian cava (an alternative to our ‘bubbly’), made with orange juice, of course.

Did I mention we had also come here to sketch the skyline? I managed to sketch the clocktower, but Deb captured a wider view and the softening night sky.  Thanks for the image Deb.

And, as if we hadn’t enjoyed enough fantastic food in Valencia, the next day Amelia and Ellen took us to a stupendous paella lunch at La Albufera, a large wetlands and lake area, a short bus ride from the centre. A couple of hours later, we were beside the lake climbing into a Vela Latina, a traditional boat. What a pleasant excursion. La Albufera means little sea, and no wonder it’s gained the moniker, as the lake is 24sq km. We were surrounded by reeds, tall, like elephant grass, and could see ducks nesting, herons on poles and others vaulting through the sky. The water was clear and rippling. Not deep.

I gazed out to the pale misted hills in the distance, and wondered about Hemingway’s time in Valencia. Had he sailed around this wonderful expanse of water, and while gazing to the hills, did the kernel of a story form in his head? The group are opening books and sketching but I continue to dream my own story; it may feature the angel from the fountain in Barcelona who finds herself stranded on earth… I jot down a few ideas then turn to my sketchpad. I draw simply, in pencil. I am tired. We finish the day with a red wine in the hotel bar and head off to bed. Tomorrow we leave early for Sevilla.