Clouds were on the list of suggested sketches we might do for the month of April.   Great, I thought. Clouds just happen to be a favourite of mine to sketch, so I didn’t hesitate to start. I had captured a cloud scene on camera during the week, and when I viewed the image again, I knew that this sketch would be different. I had been sketching with pen and watercolour wash for most of the month, but I was pulled into a memory of a series of cloud drawings I had done many years before using only coloured pencil and graphite.  I opened my boxes of polychromas pencils and selected the colours. I was in my happy place.

I went looking for the photographs of my old work some days after completing the above sketch. The big difference between the new and old works was what contributed to the making of the earlier ones. I first roughed out a possible series I wished to execute on A1 sheets of watercolour paper. I had often used my hands (as a subject) in work before and I had the idea to juxtapose my hands with a range of hills which were close to my home and ‘tell’ a personal story.  The story being my yearning to step away from the insecurities which had always shrouded me, and to challenge myself art-wise and personally.

No I in the series

The first drawing in the series reflects how bound I was to my personal insecurities and feelings of entrapment. But I soon became consumed with the process of drawing these large pieces and felt satisfied with the end results. I completed several drawings in the series  and framed them when finished. Yes, I was pleased with every one. 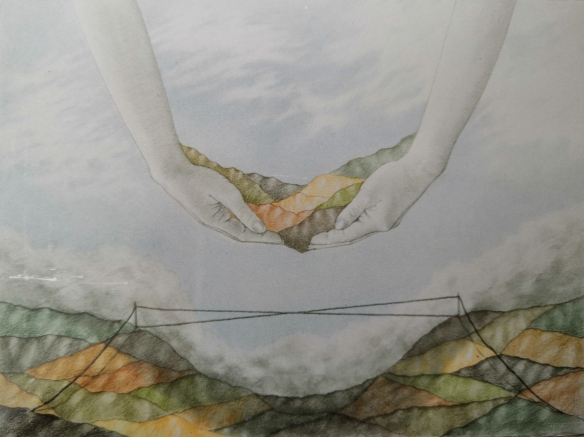 I used to sing when out walking, and image No 2 came to me as I was warbling I’ve got the whole world in my hands. What I tried to convey here, I guess, that it was really up to me to do something about my ‘condition’, or state of ‘lack’, if my life was to achieve more meaning and purpose. That the world was mine for the taking.

This image suggests that there was a way out of my situation, and that it was up to me to reach out and grasp the opportunities for change. Art, clearly, would have been one such option. And I am pleased to say that it has been a significant part of my life.

Sadly, I have none of the original works left in my possession. The three I’ve shown here were part of an exhibition I entered soon after their completion. I was happy to travel to the exhibition as I knew that a former tutor of mine, John Drawbridge, was guest judge. I was thrilled to speak with him again, and even happier to find that he had chosen two of my works to be part of a travelling exhibition around New Zealand.

Something that intrigued me was the caption written about A Way Up, and was attached to the wall underneath the artwork. It read: ‘that signs and symbols have replaced the more traditional narrative interpretation of a landscape. The land has been raped of its naturalism and is defined in a more decorative manner. The hand replaces the tree and the ladder implies the merging of the land with the sky.’

I just wished that the art ‘authority’ had asked me what my interpretation was.

7 thoughts on “What lies behind an image?”