Me in front of the Len Lye Centre

On our last afternoon in New Plymouth, we re-visited the Len Lye Centre, which sits within the Govett-Brewster Gallery building on Queen Street, to see the extra exhibits which weren’t on display the day we first went. We had hoped to also look inside the  Govett-Brewster gallery, but it remained closed, preparing for re-opening once the Covid levels had lifted. The Len Lye Centre is as famous for its architecture as it is for the artist it is named after; innovative and fascinating in so many ways. 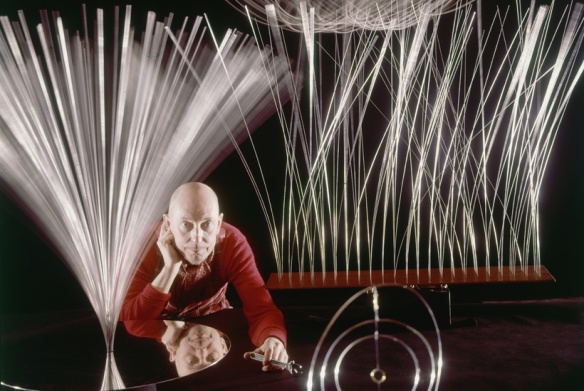 From an early age Lye was interested in creating original forms of art. Movement captivated him, which saw him venture into many genres where movement was the lynch pin. He put together fascinating film, which one can see at the centre, and kinetic sculpture, which is what most people think of when his name is mentioned. He was a true creative, looking at each invention from every perspective and producing fascinating and exciting original art. I have known about him since I was a student and have always been fascinated with his work, which he created both in New Zealand and overseas, where he spent many years of his life. Finally, I am in the art museum which has been made especially to house a collection of his work. But first another view of the outside.

A wide sloping floor led us down the first galley beside the moulded concrete curves which echo the shapes of the glass frontage. It is truly awesome. And I haven’t yet focussed on the sculpture. Each sculpture we passed was kinetic and set to move at regular intervals. The glow on the floor of the adjacent gallery intrigued us and we entered a large space featuring Sky Snakes, which debuted in February this year. We had to wait twenty minutes for it to be set in motion, so we kept walking up a second sloped floor where sketchbooks and other historical notes were housed in glass cabinets. In a large adjoining room videos played of Len Lye’s film work; all flashing shapes and colours – quite mesmerising. Some were commercials he’d made early in his career and were a way I guess to put food on the table, while showcasing his abilities.

Sky Snakes was a sensory delight. The room was blackened and seven delicate metal rods with balls at their extremities hung down from a height. They swayed slightly not giving away anything of the performance to come. It was a fabulous thing: a ballet of movement, choreographed with a perfectionist’s eye. I wish you could have seen it in person but I can at least offer you a couple minutes of a video my husband made.

This post wouldn’t be complete without showing the most famous of all Len Lye’s work in New Zealand – the Wind Wand. This sculpture has been replicated in several spots around the country, but of course, it features in New Plymouth, just a short walk from the art museum. It moves with the elements, creating sound in high winds. It fascinates all who come to gaze. The coastal site beside the boardwalk is simply the most perfect place for this soaring legacy from the most visionary artist of his time.