Today just didn’t pan out I had wished. A bad sleep. A morning meeting. But I did do two contour sketches in pen (from photos) before I left for my second attempt at finding people at the ferry terminal. And what a beautiful day it was for walking. Oops, bumped into a friend and accepted the invite for a cup of tea. At least we chatted about sketching.

By the time I finally got to the ferry building naturally the crowds had evaporated. Never mind, I thought, and settled in a perfect position with a view to a couple of men seated opposite. 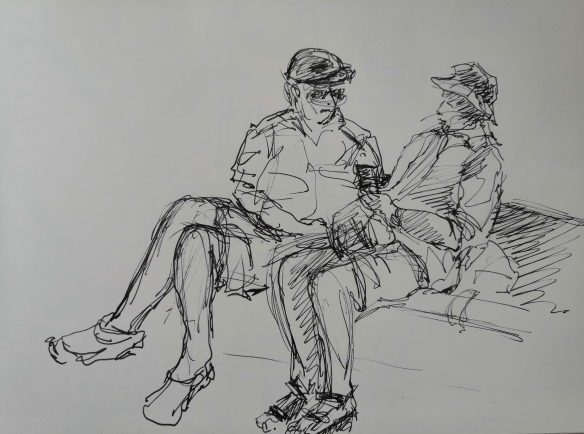 I intended to sketch in pen for the day and picked up one of my favourite nib pens.  I like its shaped handle which fits comfortably in my hand. With this pen I can use a light touch and achieve a fine line, or with slightly more pressure of my hand I can produce a thicker line without wrecking the nib. I had just got started, and was enjoying sketching, when a woman plops herself beside me (I chosen to sit in one of three seats isolated from the rest). Why couldn’t she have sat in one of the hundred or so empty seats surrounding us? Oh well. The men were off, and so was I – outside.

I sketched a woman with her back to me very quickly as she was ready to leave. Next,  switched to sketching a young woman on a bench seat in the distance. No time to do more as she took off inside. By now I felt like lunch, but walked along the waterfront a little in the hope of finding a group to draw. 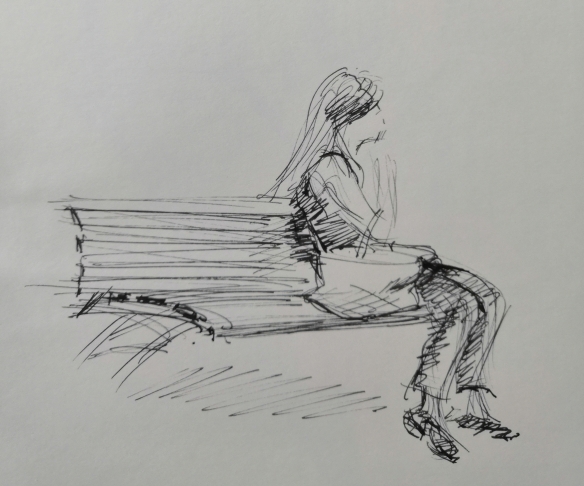 I did, ye ha. Men with a bike, sitting on a bench, and a woman standing alongside. 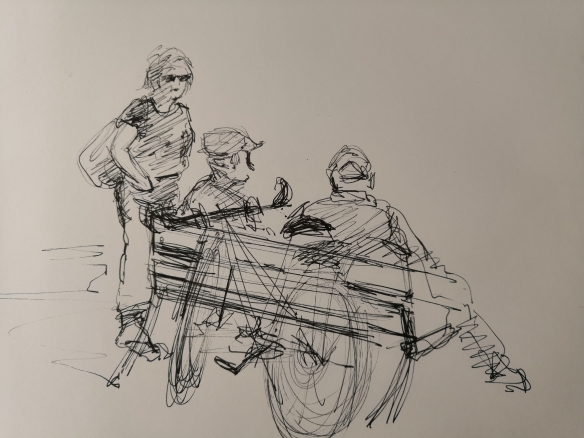 It was becoming clear that I would be nowhere near my hoped for 15 sketches for the day. I was asked however, to go to a local cafe where a couple friends were meeting who had suggested I might like the opportunity to sketch them (so I could add to my total). I sat a little distance away and fortified myself with a glass of an excellent Prosecco as I scribbled away. Two more sketches done. 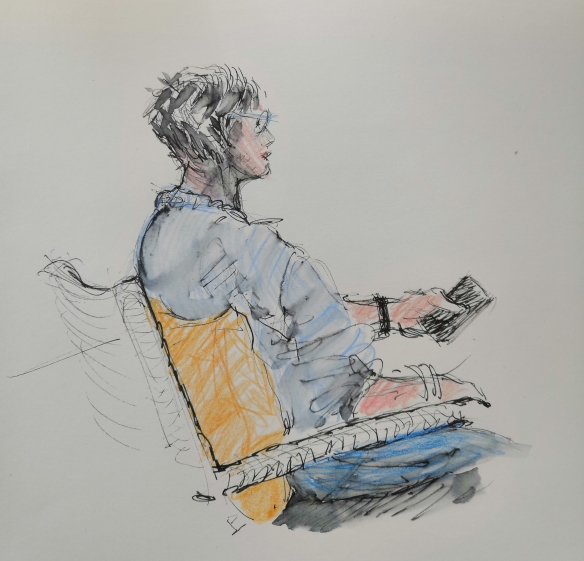 I was quite happy with sketch 1, but felt so-so about sketch 2.  By now I was very tired, and knew I would have to accept a lower quota of sketches for day four of the self-imposed challenge. That’s just how it was. ‘Them’s the breaks’ as the saying goes. I wonder what day five will bring?